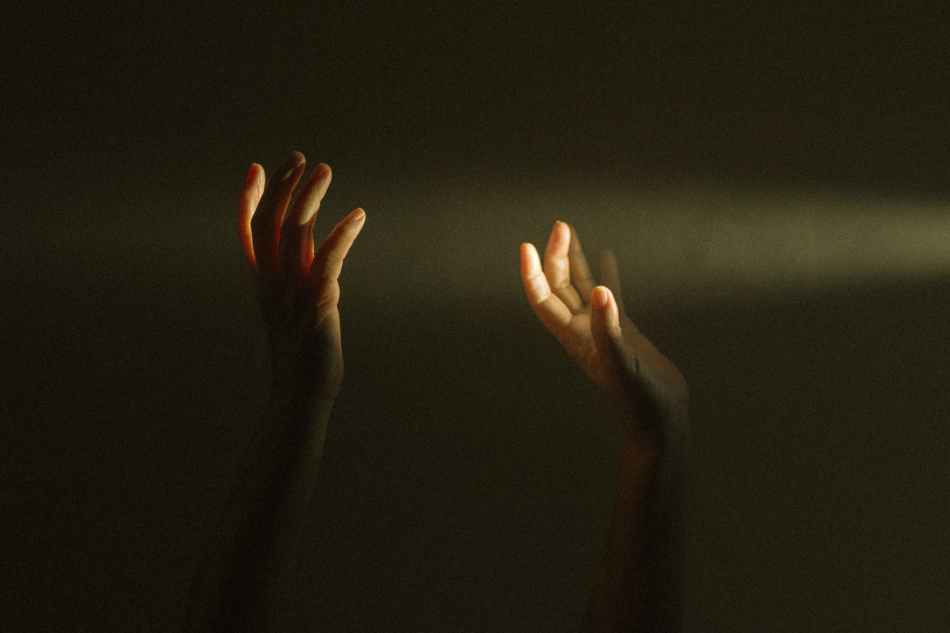 The question echoed into the distance, tumbling away into the void. She blinked once. She blinked twice. Yet all she could comprehend was complete, inky darkness. Her ears strained at the emptiness, attempting to catch a response. Yet none came. She was alone.

“Hello?” she cried again, but still the only reply that came was the rapid thumping of her heart against her rib cage and her frantic, shallow breaths. The vastness was almost a living thing, settling on her skin like dust. She became aware then of where she lay, of the cold, gritty substance that pressed up against her frame.

Her mind raced to identify the substance. Allowing her wrists to sink into it, her body shifted, almost worm-like, as her hand coiled to grapple the material. It filtered softly between her fingers. Her toes flexed. She heard laughter and smelt the sea.

Sand, she remembered. It’s sand. Where was she?

A heartbeat. A blink. Then the sand gave way. It was draining beneath her, encasing and pulling her further into its grip. Submerging her body. A scream escaped her as she slid deeper, sand pouring over her feet, her thighs, her chest. Consuming her. She kicked and grabbed wildly, with little avail, her instincts electrified with primal fear. Like dirt on a coffin, sand was being thrown on top of her and her lungs filled with it. Grit scraped mercilessly against and under  her eyelids, filling her sockets and razing across her eyes. Her skin burned with rawness as masses of piercing granules stripped it away. She sank further and further under the enormous weight, until she was listless under its torrent. Her blood soaked into the sand. Then her heart stopped.

The voice was like a handmade blanket, so familiar and warm. Then suddenly it became panicked. There was a piercing scream, a constant repetition of her name over and over, first alone and then accompanied by different voices.

“Sophie! My beautiful baby girl wake up, please WAKE UP!”.

She knew that voice.

“Please Sophie.” Now just a desperate whisper. “I love you”.

But Sophie was gone, a hollow shell encased in the arms of her distressed mother.

Sophie sat up, greeted once more by the darkness. Carefully, she brought a hand to her head, grains of sand trailed down her back as she fingered her hair. With her other hand she traced her lips. Sore to the touch, intensified by the salt. What just happened?

Sophie wasn’t staring into the abyss anymore. Someone or something observed motionless in the darkness. The atmosphere around her had shifted and again her name, ‘Sophie’, came as a quiet muffle as though from afar. She swallowed. The voice was like air, everywhere at once, but nowhere at all. Accentless, genderless, eternal. A voice she knew, but at the same time didn’t. Yet she did not hesitate to reply.

Subconsciously she knew it was a friend. As her reply left her lips, a cold chill brushed over her. It was closer now.

Again, all she could manage was a meek ‘yes?’ Her mind raced, tumbled and then suddenly it cleared, as if a concealed instinct stepped forward and whispered, ‘trust this voice’. The silence of her thoughts that followed was startling, bringing her to the realisation that she could no longer hear her heartbeat.

Bringing her hand to her neck, she searched for a pulse and when she found none, she felt her wrist. There was no blood running through her veins. She would have gasped, but there was no air in her lungs. Her body had rejected life and if she was not alive, then she was with death.

She searched the darkness for the being. She could tell there was a smile. Somewhere in the unknown, someone was smiling at her.

“Come with me,” whispered the darkness, its tone still without definition, but she trusted it, was soothed by it and she willingly accepted the proposal.

“How did I die?” Sophie asked her new guide, as they made their way across the sloping sand dunes, her feet tracing the foot grooves it made in the sand. It was definitely some type of material body in front of her, creating the path she followed trustingly through the darkness.  Her eyes were no more certain of where she was than her other senses, and only the sense of her removed leader encouraged her to climb the folding sands.

“You just didn’t wake up,” came the reply.

Such a brief answer, yet Sophie felt content with the response. No fear or sadness followed. She must have left behind a family, friends, a life, yet somehow her mind could not locate those figures. Perhaps there wasn’t much point. They weren’t coming with her. If she was dead, there was nothing else to fear. At least that’s what Sophie reasoned.

They continued walking. The silence occasionally interrupted by the soft crunch of sand released under their steps.

“It was just your time.”

Sophie reflected on what had been her time. An instinct it seemed from a life before this expanse of sand and darkness. Absently, she reflected she should remember a life. That life she led before her death. But she remembered nothing. Life seemed only a notion to her now, even as something snagged in her chest. Once the protagonist to her own existence, her story had been so easily erased with the flutter of her eyelids, a story with no significance, a story with no meaning.

Why had she lived? When her own material existence and that of the people she had shared her life with were of no recollection to herself. Just as she had forgotten, so was her fate to be forgotten. She had been nothing before her life and her death had negated her infinitesimal existence on Earth. There was no justification for why she had lived at all.

Sophie paused, sinking into the sand, as though trying to find some grounding, trying to accumulate what fleeting thoughts she had left. Whilst doing so her hand touched a soft material lying upon the sand. Her hand retreated in shock, but soon found its way back to examine what felt like yarn. Her hand continued to explore and unexpectedly encountered the body of her guide. A feeling of comfort overwhelmed her at the touch of a physical being. She tried to feel her way towards her guide’s face but it drew away in a pull of air. She could feel the shifting of the sand as the figure stood up towering over her, silently observing. In what felt like hours, but resembled moments, the looming silence was broken.

Blinking, Sophie looked up to where her escort must have been standing, trying to find a face, a structure to the shadow that had led her when she was lost and had lost everything.

“I have to go now?” she asked, unsure what it commanded.

With that, as though she knew intrinsically that they were there all along, Sophie reached out her hands and took those of her companion, cold to the touch and ivory smooth. They felt bony, almost bare of flesh, yet she did not want to relinquish her grip, least she was left alone again. The grip of those hands, locked with hers, gave her a resounding strength that lifted her to her feet and brought her face to face with her guide.

Together they looked up at the void that had surrounded them as it appeared to melt away. The darkness that had consumed her every being began to lift. Sophie looked up out of the black void and saw a thousand splendid stars bursting through little holes tarnishing what could have been the night sky. Each star poured light that fell from the heavens like drops of rain upon them. Sophie couldn’t help but smile.

Looking towards her friend, she noticed that the illuminating droplets falling softly and steadily upon the face, washed away the tenebrosity to reveal a discolored white, edged with shadows and markings of where flesh had one been. The light had stripped her companion of the protective reassurance Sophie had been journeying under. With the ever increasing glowing of her surroundings, the disparity of her companion could not be more certain. She was hand in hand with Death.

Sophie staggered back releasing her grip. Fears that she thought she lost to her physical existence came flooding back. She was with Death. She had been led by Death and as she looked upon the decrepit figure hooded in a long black robe, staring at her through hollow eyes with exposed teeth grinning at her, she did fear Death. With that last thought, the weak structure tore and infinity consumed them. She was gone. Another soul reclaimed by the energy that had formed and sculpted her. Death glanced at the newly formed pile of sand, reached out and allowed the grains to lace between the gaunt bones. She was gone.

0 comments on “Beyond the Dunes by Em Beasley”

Anyone else still obsessed with Wordle? 🤩
WE’RE BACK WITH A NEW PROMPT! ✨ it’s been busy over at FEHQ but we’re back and ready to get posting again! What writing will this prompt inspire?
*CLOSED* SHORT STORY COMPETITION CLOSES TODAY AT 11:59pm ✍️ LINK IN BIO FOR FINAL ENTRIES ✨ GOOD LUCK!
What’s your favourite book adaptation? Comment below 👇
*CLOSED*
@rosalindhullarts ‘s fantastic spoken word poem is now live on the site - link in bio to read! ✨
⭐️FOREVER ENDEAVOUR MAGAZINE’S CHARITY SHORT STORY COMPETITION IS OPEN FOR SUBMISSIONS⭐️ Closes 25th April!!!
NEW POEM by @lizyew.writes live on the site now! Link in bio ✍️
One of our FAQ - the answer is YES! If you are an author and would like to send us a copy of your book, please get in touch through hello@foreverendeavour.uk or directly with Becca, our editor, at becca@foreverendeavour.uk 📖
Check out this poem we put up last week! Link in bio to read 📖
*CLOSED*
How do you prefer to read your favourite books? Comment below if you’re Team Book or Team Kindle/Tablet! 🤔📚📱
*CLOSED*
Submit something for this week’s writing prompt - LOUD 🔈 email hello@foreverendeavour.uk or DM us now! 📩
*CLOSED*