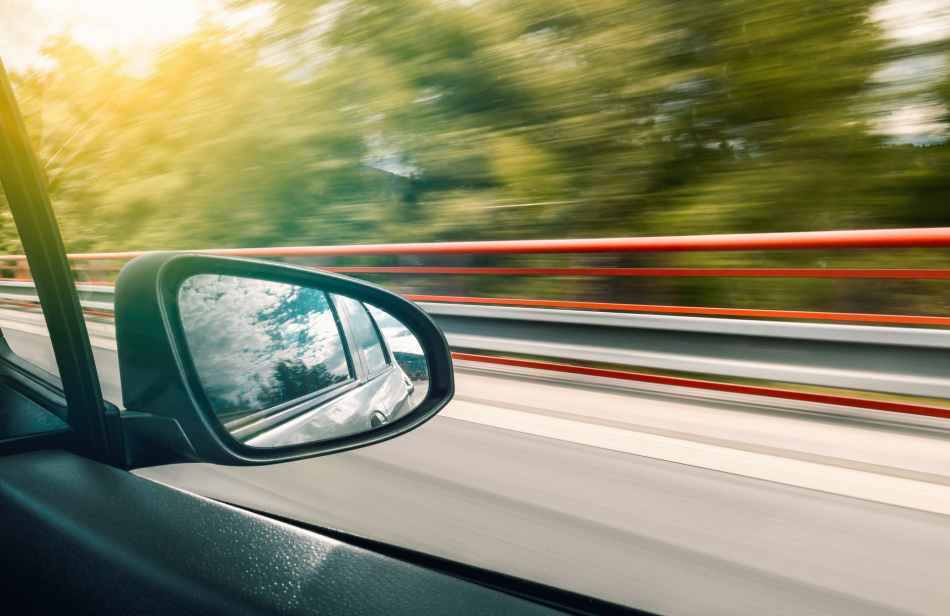 The shock of her auburn hair captivated me. The colour of her eyes, like water over slate, took the air from my lungs. Suddenly I was motionless in the stream of rush hour pedestrians, watching incredulously as she approached. Like a vivid dream, I hardly dared blink in case I woke, my mind tumbling with unbridled possibilities that started with her hand in mine. She remained somehow oblivious, still lost in the mundanity of her morning commute, as a wave of decisive, palpable realisation coursed through me. My heart raced. I could almost feel her fingers lacing through mine. In the middle of a street on a Tuesday, I was home.

She smiled, a grin that set my hairs on end and promised trouble. Then her eyes met mine. For a second, we simply saw each other. And all those possibilities stretched between us. I smiled, raising my hand casually as though to a friend and not a stranger seen on the pavement to work. I earned a half smile then. A slight curving of her lips. A glimpse of teeth. It was the most beautiful thing I had ever seen. In the almost imperceptible crinkling of her eyes, I saw the future. A face gently furrowed by a life well-lived, etched softly with a thousand splendid stories and eyes lined with a million smiles. Her hair was faded grey, drifting in the breeze as she grinned with eyes still glinting with all the new adventures she had planned. Her eyebrows flicked up, almost conspiratorially. Her gaze mirrored mine. In that instant, I knew I wanted to grow old with her. I wanted more half smiles that, I knew then, would never fail to make me feel complete.

That was the moment we met. A chance glance sealing our fates on what should have been a long and happy lifetime together. It was my fault. I should’ve foreseen it. After all, I hadn’t seen myself in that moment. Her, aged and beautiful, but not me. Perhaps, if I had, it wouldn’t have happened. I wouldn’t have left. I would be with her now. And not, just six years later, gone.

“Why did you leave me?” She cried.

Our bedroom was a riot of boxes and objects that used to belong to me. She was screaming.

“How the hell did you get to leave me?”

Then it was hailing clothes again, blindly torn from the wardrobe, scattered, abandoned, over our floor, our dresser, our bed. Surrounding her with a myriad of colour, textures and memories woven into fabric. Breathing hard. Eyes closed. Just so done with this feeling. About how I left her. About how I was gone. Slowly, almost dazed, she picked up a sweater at her feet. Soft, red, and warm. And smelling of me. She breathed into it, smelling the promise of a lifetime together in my scent. Still so strong. Her chest jarred nauseatingly. How long would that last? Despite her rage, I could tell she was scared to lose me that way. How could she live if my scent and my face were hazy as fog? Yet, in a way that disgusted to admit, she was also scared of not forgetting me. Such guilt tinged the bitterness and sorrow that had come with me leaving. She was scared and I wasn’t there. Though I was there, watching her soundlessly. I was standing right in front of her as she finally voiced the cacophony of words unspoken for two months. But for all she knew, and all the world cared, she was alone.

“Why did you have to go?” She whispered into the sweater. “What happened to all our plans?”

She inhaled once more, then breathed out. Her thumb brushed the fabric, then she folded it and made space for it on the bed. A breath. Then another. Before repeating with another piece of clothing, until my scent was all over her and the bedroom looked untouched.

That night she lay on our bed, staring into the emptiness of my side. Despite complaining often that I took up all the space, she stayed on her half. The echoes of the clock chiming two in morning settled over her like dust, leaving her blanketed in the silence. There were no quiet snores or mumblings to wash over her like a comforting, reassuring tide that, even in darkness, she wasn’t alone. I was staring right back at her as she stared right through me. A ghost of a man lying beside the shell of her. Barely a hair breadth apart. Right there longing to touch her, to stroke her hair and hold her against my chest. To remind her that there was a time before me and she was happy then too. And that she will be again. Her eyes are staring at me. Through me.

“I miss you,” she whispered, her voice barely denting the emptiness.

‘I miss you too,’ I murmured back, barely stirring the memory of my voice in her mind. The clock chimed three times more and still she lay awake wondering where I was now. Wondering if I was truly gone.

It’s curious what remains in the aftermath, the debris that lingers. Tenacious memories held, tightly bound, to the objects and places we surround ourselves with. Like that photograph on the mantelpiece of our first-year anniversary. The one she was staring at now. It was one of several items that hadn’t been cleared in her spontaneous one-day cleanse of me. The debris that lingered. She was remembering that evening, as I was remembering another. We’d dressed up in our best clothes, but hadn’t left the house. There was wine and music, and many accidents narrowly avoided as we nudged and laughed at each other in the kitchen. Tasting more of the food on each other’s lips than off our forks. Paying more attention to each other’s eyes than to the plates and the candlelight. More than I had been to the road. Then we’d pushed and pulled each other up the stairs, scattering our shoes, her shawl, my shirt in our wake. She led me into the dim light of our bedroom. As I steered around the bend, just a little too fast, on a road glinting in my headlights. And I tripped over the edge of the bed, dragging her down with me. Her lips pressed against mine, smiling, laughing with that stubborn childish delight. I was swinging her over me, feeling the weight of her body as I turned, through the dark, the seat belt straining against my chest. And my stomach lurched as I collided with that wall, fluttering as she smiled down at me with that grin that promised trouble. Her hair brushed my shoulders, my cheeks like the glass of the windscreen peppering my face, scratching it hard, while her fingertips pressed like warm cotton on my skin. Her lips were smooth, soft, still tasting like the cherries from dessert, like blood as I bit through my tongue and choked as it filled my mouth, and my heart. Stopped. Because she was so beautiful. Because she whispered, ‘I love you’ in a way that made me feel so safe. So whole. Because I couldn’t feel anything anymore except for the blood in my mouth. In that momentary stillness. In the haunted silence that followed, with the palpable realisation of what was happening pressed against me, I said “I love you.” I thought ‘I love you.’ I blinked once. Twice. Remembering her eyes, her scent, her name. The darkness was broken by flashes of amber light and a hiss that was nothing more than a whisper to the ringing in my ears. I blinked again. I breathed. ‘I can’t leave you,’ I thought distantly. Then unconsciousness closed the scene, with her name left unspoken on my lips. On the bed, stirring me from the doze I had fallen into, she’d taken that photo. Disheveled and sleepy. But smiling. And alive.

That was nine months ago. Nine months since those blue lights blemished the sides of our home, setting it alight at 6pm. I was there as she was told, and I stood, unnoticed in the hallway, as she suppressed the shock with a stunned, numb silence. She nodded on cue as they told her about the ice, the car, and how the body needed identifying. The remains of who I’d been. She’d said thank you, absently, told them goodbye with barely more than a breath, and as the door shut, she just slid to the ground. The silence ripped through me, so loud and wretched that I didn’t understand how the house hadn’t fallen with her. That silence that pulsed through the night. Yet it stood, just as she eventually did, as the sun rose. I was gone. But still I saw it all. In whatever I was now. Feeling so shattered, so insignificant, and cold. Like glass. Broken on a narrow, winding road.

Exciting things happening at FE HQ - We’ve moved house! We’re taking a short break from uploading to the site and reading submissions as we get settled in. Please continue to send in your submissions, just be aware that it will take us slightly longer to reply, and therefore a bit longer to get your writing on the magazine ✍️ Watch this space - exciting things coming soon!! 🖤
Any other writers guilty of this? 😂
What’s your favourite character name you’ve found? 🤔✍️
NEW POST - Part 1 of Kevin’s story Intrusions is live on the site! Link in bio ✍️
Our ‘Forever Grammar’ series’ newest article on the difference between ‘your’ and ‘you’re’ is now live! What other grammar worries can we help you with? Leave a comment! ✍️
NEW POEM ✨ ‘Passion’ by Lana is live on the site now - link in bio ✍️
Tag someone who needs to hear this! ✍️
Have you ever been to a bookstore to see where you would be on the shelf? This is a fun and interesting thing to do as an aspiring author! Why other authors and genres are you near? 📚
We’re looking for GUEST ADVICE ARTICLES from passionate writers who specialise in these areas. If you are knowledgable about any of these genres and want to help aspiring writers better understand them, send us an email to hello@foreverendeavour.uk with the subject ‘Guest Article’. We’re looking forward to hearing from you! 🖤
NEW POST by @monhattanmaid - link in bio 🖤
Comment below! ✍️
👏🖤
Do you have poetry, fiction or creative non-fiction to share with the world? Forever Endeavour is open for submissions from aspiring writers and we want to hear from YOU! Email us at hello@foreverendeavour.uk or drop us a DM for more info on how to get published - click the link in our bio for the submission guidelines and word count! ✍️ Get in touch NOW to have your work featured in August!!
NEW POEM ✨ by @dia_rancid live on the site now! Link in bio to read 🖤
Called out 🙋‍♀️🙋‍♂️