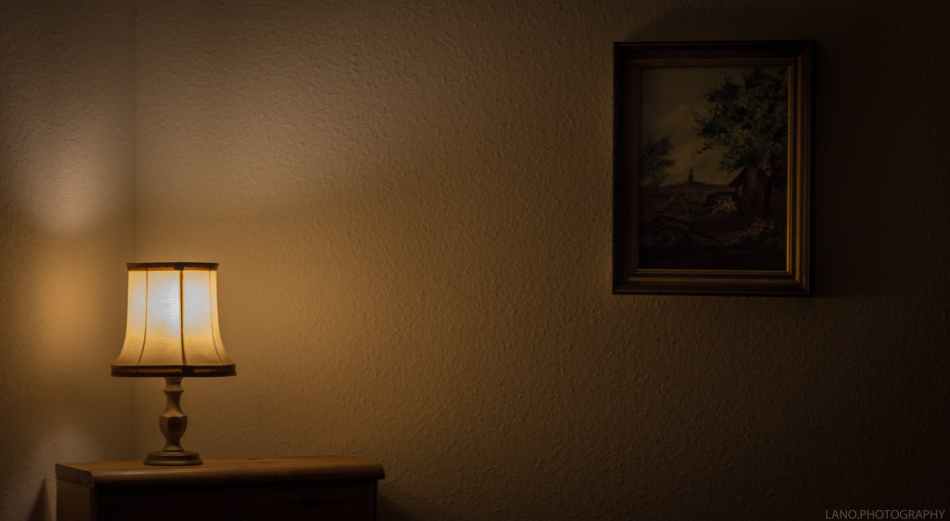 He opened his eyes but found it hard to focus through the gloom of night. His mind, racing a moment ago, was now decelerating, but he felt disarmed, unsteady, as if he had stepped off a fairground ride reeling in search of his sea legs.

Slowly his bedroom revealed itself, first the far edge of his bed, a definite delineation between his light duvet cover and the darker wall opposite, then the outline of the window, a moonlit frame. When his eyes flicked right, he could distinguish his wardrobe, but there was something unfamiliar nestled between its flat top and the ceiling.

It was when he tried to crane his neck to gain a better view that he realised he could not move. His eyes were free to dart around, but his body was frozen, anchored with the stone torpor of the dead. Panic gripped him instantly, but unable to cry nor grip the sheets in clenched fists, he was denied the physical release of anxiety. Instead, it infused his blood with a liquid chill that raised every hackle with a dread charge.

The wardrobe creaked again and his eyes snapped back to the ceiling. There was movement, something nestled in the corner, squashed and fidgeting restlessly. He could discern a tangle of limbs, leathery and mottled, butter spread thinly across burnt toast. As the limbs unfolded, a face emerged. Narrow set eyes, beady and black, sat atop a flared nose which itself crowned a wide, thin pair of lips. Four slender fingers crept over the edge of the wardrobe like a spider, its hand slowly moving down the depth of the door, an impossibly elongated arm extending behind it. Another hand materialised from the corner, fingertips touching the ceiling, edging across the room.

As the first hand reached the carpet, his body shivered with a fresh injection of terror, paralysis stranding him like a webbed insect. He watched as the hairless, sinewy arms tensed and the shape raised its torso from the top of the wardrobe using the floor and ceiling as leverage, allowing its legs to slide down the sides until, they too, met the floor. As a cloudless moon cast its sheen across the two of them, the creature lowered itself down, its scale now fully apparent, filling one end of the bedroom almost entirely. It appeared too large, too unwieldy, to have fitted naturally within the narrow box of space atop the wardrobe, its dimensions somehow manipulated by malevolent physics. A concave chest and distended belly, suspended between spindled limbs, bobbed up and down as it slowly devoured the space between them.

With one hand pressed against the wall for balance, the other appeared at the foot of the bed, the fingers digging into the duvet, drawing it into the palm until a fist was made, then slowly dragging the bedding towards itself inch by inch, leaving him naked and exposed.

The need to scream overwhelmed him but no sound could be formed save the sharp, involuntary breaths his belly pushed out like an accordion, clouding the air with vapours of frost. The sheet beneath him was wet through with perspiration, but his sweat was cold as a still pond. The creature seemed to absorb all the heat from the room, and as its narrow legs split to straddle the bed, he felt its warmth like a halo around him. Two grim hands were placed flat upon his chest as the monstrous apparition lowered itself onto his belly, the heat from its genitals and the feeling as they rested upon his skin mined a new seam of revulsion deep within his core. For its size, the creature weighed little, flesh pipe cleaners for limbs pinned to a balloon of blackened hide. The disparity between its size and its weight added to the unearthly sensations it evoked, it was a half-remembered nightmare bought to life, absent the details required to give it density.

It sat there for a while, studying him, those tiny black eyes inscrutable, offering no window.  He couldn’t move, couldn’t speak, couldn’t think. Every thought he tried to form evaporated like hot breath on a windowpane.  All he could do was stare back, daring not to close his eyes for fear of what would happen in the dark.

He felt the creature tense suddenly, exhaling with a rattle, its face crunched into a grimace that, like spent elastic, took a while to return to its natural tension. The slender scar of its lips parted, its jaw widening, a toothless, black wound that gaped to an unnatural degree. A soot black tongue poked out as it tensed again, a yellowing bulb of saliva forming at the tip and slowly descending like blown glass. Its fingertips dug into his chest as it convulsed a third time, the slow stream of spit pooling in his belly button, causing his own stomach to contract in disgust.

It doubled over as it began hacking from deep within, its face inches from his own, a stinging stench of burnt matches filling his nostrils and making his eyes water. Through a prism of tears the creature’s face blurred, and when he had blinked them away, he watched as it parted those thin lips wide again and thrust a hand into the abyss. It gurgled a moan, breath laboured as it wrestled with itself, until finally the hand retracted, thumb and forefinger pressed tight together. Between them was a thick, hairy string, wet with saliva and stomach acid. With both hands it began to pull, the reeled end coiling on his belly. Now he could see that it was periodically knotted along its length, and every time another tangled notch approached, the creature would moan with discomfort and yank it harder to clear its throat.

Two excruciating metres followed before the unspooling halted. With both hands it tugged hard on the string, but something was resisting its labours. Every sharp tug would snap its head forward, causing it to hack violently and noisily, its eyes clamped shut as if in supplication to a doomed god that would not hear its pleas. It dropped the string and took in a series of deep, stuttering breaths, resting its palms once again on his chest. He felt like it was draining power from him, summoning up a final battery charge. With renewed vigour it began wrapping the string tightly around one fist until it almost touched its lips, then it latched on with the other hand, took one final deep breath and pulled as hard as it could.

With a jolt, the paring knife landed in a splatter of blood upon his chest, the black string knotted around its familiar handle. The shallow snout of the blade that tapered into a fine point glinted in the moonglow. With a finger and thumb, the creature held one of his eyelids wide open and he felt the fluid around it instantly begin to dry. With its other hand, the creature pinched the string about two inches from the knotted handle and lifted the knife slowly into the air. It began to swing slowly in a circle as it was raised above his head, and there it stayed, suspended for what seemed an eternity until its rotation had lost momentum. Time seemed to stand still. His body aped the ambient temperature of the room, buoying him with a strange sense of weightlessness. The blade slowly descended towards the concave fleshiness of his eye until he felt the initial scratch upon his pupil, the tension as it held firm was at once as strong as slate and weak as egg white. Whether this eldritch intruder was the source of his thoughts, or the result was a question that was lost in the pinpoint, focused possibility that teased and tormented his imploring eye.

What was the best book you read this year? 📚
Happy Monday and hello to all our new followers! 👋 Our weekly writing prompt is ‘Cruel’ - if you feel inspired to get writing, why not send your creation to us, for a chance to be featured on the site ✍️✨
CALLING ALL ASPIRING WRITERS! ✍️✨ Do you wish you had a supportive space to showcase your creative writing and develop your writing portfolio? Forever Endeavour magazine publishes fiction, poetry and nonfiction pieces from new and aspiring writers and we want to hear from you! 🖤
Last week we published ‘Shivers’ by @amyjasek ✍️✨ LINK IN BIO! 🖤
What are you currently writing? Comment below! ✍️
PART TWO of Kevin’s creepy short story ‘Intrusions’ went up on the site this week! Let us know what you think ✍️
Happy Halloween! 🎃
NEW FICTION - Angie by Danielle Dixon is live now ✨
Which one are you? 📖 #trueneutral #chaoticevil
Andddd we’re back! After a short break to move into our new home, we’re finally back posting, first with our weekly writing prompt! Send in your creative writing now to be featured on the site!! Link in bio for how to write for us 🖤
Exciting things happening at FE HQ - We’ve moved house! We’re taking a short break from uploading to the site and reading submissions as we get settled in. Please continue to send in your submissions, just be aware that it will take us slightly longer to reply, and therefore a bit longer to get your writing on the magazine ✍️ Watch this space - exciting things coming soon!! 🖤
Any other writers guilty of this? 😂
What’s your favourite character name you’ve found? 🤔✍️
NEW POST - Part 1 of Kevin’s story Intrusions is live on the site! Link in bio ✍️
Our ‘Forever Grammar’ series’ newest article on the difference between ‘your’ and ‘you’re’ is now live! What other grammar worries can we help you with? Leave a comment! ✍️