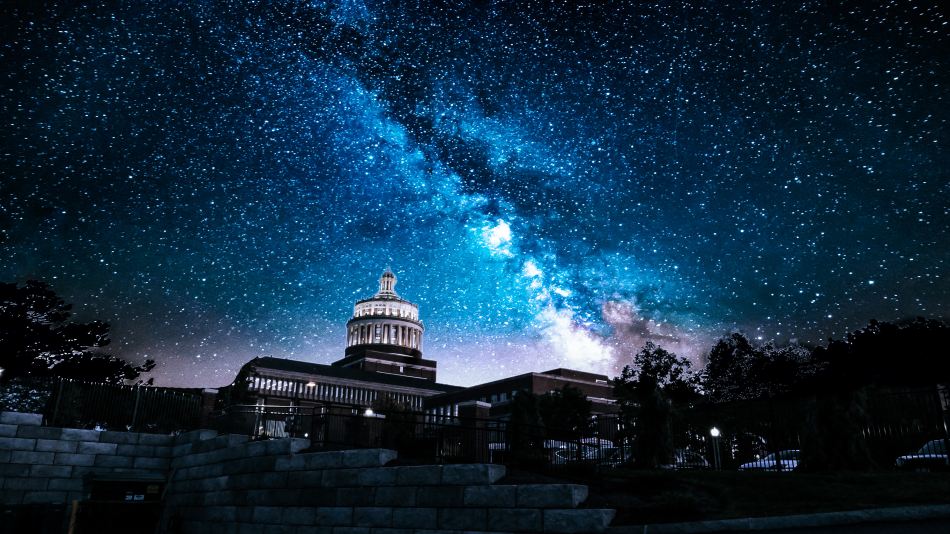 Continued from part one (where in the year 2242 the scientific L2DMC research group are about to ‘map’ dark matter to find out what lies within it. Junior Tech Assistant M’diitch is out the office watching a ‘skyscreen’ presentation: Captain Addams’ Lost Love – we join the action being broadcast mid-way through as Addams is retelling a night when he fell in love) …

“We made our excuses and left, we stumbled along snogging vigorously in the warm evening rain. But just as we turned the corner of Gt Spence Street, a freakin military-grade, non-standard, seriously-armed combat shock assault droid and several heavy looking thugs sprung out on us and demanded that JJ hand over $5million nuDollars cred chip she had apparently stolen.  Before I could even react JJ had drawn a dinky but deadly hand cannon from somewhere upon her person and fired a null-bomb round into the faceplate of the droid.”

“I could only watch in shock and awe as she grabbed me and pulled us into a diving roll away as the explosion tore the top of the droid’s ‘head module’ off. The combat robot was already returning fire, but the damage it sustained made it lose motor control – spinning around and mowing down the thugs around it.”

“I found myself looking on in shock and awe as the bad guys were torn apart by their expiring battle droid comrade, JJ was already stowing her gun and had pulled a neuro penaliser from her dress which she proceeded to zap me with.”

“We were coated in a bloody spray of body parts and shell casings – JJ was silhouetted like an angel in a maelstrom of gore – she looked me in the eye are said: ‘Sorry, don’t think it’s gonna work out, you’re much too nice a guy to be involved with me!’ She quipped with one of her killer sad-but-sexy smiles.”

“As I lost consciousness, the last thing I saw was her hitching up her surprisingly gadget-packed sack dress and running off into the night. I never saw her again. Of course, I searched for her – with no luck and I’d say part of me is still in love with that bad-ass chic to this day…”

“What do you think of that eh?”

The top-of-the-range nursedroid is looking as bored as it is possible for a machine with no emotional expressing facilities. It is however programmed to humour its patients so responds “Oh my, sir, unrequited love is the most poetic! I’m guessing this lost girl the reason for your maverick lifestyle? Now bend over I need to administer your evening soul-boost enema…”

Before the happy denouement of the skyscreener M’diitch got an emergency alert from the L2DMC lab A.I. – without explaining to his Mrs, he leapt up, knocking his YUM-Gallon drink all over his wife and the others in their seating area. He sprinted for the exit and was back in the research facility within 20 mins.

His boss, Grand Information Controller Doyyle, had already messaged that he wanted an urgent update about the priority Dark Matter alert that had been awoken him from his evening snooze.

M’diitch stared in disbelief at the readouts on the screens. The breakthrough coding codenamed ‘MEJA37’ which he had taken the lead on working with since joining – had been initially configured in 2189 – now, for the first time, it had something that flagged as a ‘hit’. The data pouring in was modelling an extremely detailed record of the speed of a target galaxy’s rotation from its centre all the way out to its far reaches. This macro ‘rotation curve’ measurement was ironically exactly what astronomers used to determine the amount of ‘unknown’ dark matter in any given galaxy. The curve data was fresh and far more detailed than anything the L2DMC had attained in their almost 200-year existence – this was unprecedented.

But it wasn’t the curve data that was troubling M’diitch – it was the single subscreen that he had programmed to run its findings through his Soul Upgrade module on an off-chance that it would add the even wider variable boost effect to the galaxy monitoring.

Soul Upgrade modules were the ‘in thing’ for the populace. They normally plugged into a person’s headchip and channeled their emotional response stimuli through a filter which allowed for a much greater sense of well being to be maintained – and no guilt to be felt – whatever the individual happened to get up to.

There though, on the screen, the first concrete imaging of an area directly within a segment of Dark Matter glowed and he was transfixed.

The subscreen seemed impossibly to be showing a burning backdrop of infinite arches framing a monstrous scaly ‘face’!?

M’diitch almost peed himself as at that moment all the lights in the lab went out – along with all the other screens apart from the one showing this kind of demonic horned creature that seemed to be packing far too many teeth for its jaws to accommodate.

‘Nyctophobia’ as described in part 1 produces symptoms beyond the normal instinctive parameters, such as breathlessness, excessive sweating, nausea, dry mouth, feeling sick, shaking, heart palpitations, inability to speak or think clearly or sensation of detachment from reality, loss of bladder control and even in some cases death.  M’diitch, bathed in the glow of the hell-fire flames was ticking off many of these symptoms as his mind recoiled from what it was seeing.

The lights came back on suddenly and the Lab A.I.s started running diagnostics to ensure a successful reboot of the various expensive kit. The NeoHarryKane3 telescope – named after the New Tottenham robostriker who helped them win the L2 Soccer Premiership for twenty years running was unique in that it had a built in superfusion A.I. tasked with combining Einstein’s theory of relativity with every previous piece of Dark Matter research on the planet. According to Einstein’s general theory of relativity, gravity actually warps space and time – and it transpired that it also might be the key that shows Dark Matter is responsible for more than just the formation of galaxies.

Mankind wasn’t ready, how could we be? What showed up in the ultimate darkness of Dark Matter turned out to be what many had termed over the centuries as ‘Hell’.

M’diitch found himself the first human to stare into the face of ‘Abaddon’ – which in Hebrew means ‘doom’. Described in history as an ‘Angel of the abyss – the king of an army of mutant locusts’ and ‘The Angel of Death’ – he / she sure looked incredible on the HD subscreen. Apparently not impressed at having his first ever ‘selfie’ taken the demon appeared let out a furious howl of rage (there is no sound in the data stream – just images).

M’diitch was in an almost catatonic state but before losing control of his motor functions he at least managed to hit the ‘save to file’ command – in the process changing the history of humankind forever. Actually, if you want to be technical about it – his capturing of images from within ‘Hell’ shortened the future odds of humankind existing for much longer at all… But that is another story…

If you liked this – you’ll love COMPLETE DARKNESS – a Darkmatters Novel, by Matt Adcock (@Cleric20) which tells of the events following our inadvertent mapping of ‘Hell’. Find out more at www.completedarknessnovel.com. Pre-order it here: https://amzn.to/2YIFwlF

1 comment on “What waits for us in the Dark (Matter)? – A Darkmatters Universe Fragment, pt. 2 by Matt Adcock”

Or enter a custom amount

Forever Endeavour is dedicated to creating a platform for new and aspiring writers. You can help fund all the work, advice, competitions and more that we provide! Thank you for helping us promote and showcase new writers - we appreciate you!

It’s a difficult time in the UK at the moment for a lot of reasons. We hope this prompt helps you reflect on peace, justice and hope 🕊
Anyone else the LEAST inspired when they actually sit down to write? 😭✍️
Check out our new series on the magazine - Vamp Up your Vocab! We’ll give you some unique, strange and interesting words you might have never heard of to use in your writing! The first part is up now - Phobias 😦 Link in bio ✍️
Today, we’ve shared the first of our 3 shortlisted stories from the Short Story Competition 2022 - read the amazing ‘That’ll Teach Yous’ by Katherine Mezzacappa now! Keep a look out for the others over the following weeks 📖
Pens and paper at the ready - what will you be inspired to write from this prompt? ✍️
Congrats to Lesley, who won FIRST PLACE and £100 prize in our short story competition with their entry ‘After the Heist’ 🥳✨
Congrats to Christopher, who won SECOND PLACE in our short story competition with their entry ‘Edna’ 🥳✨
Congrats to Helen, who won THIRD PLACE in our short story competition with their entry ‘Nocturnal Pilgrimage’ 🥳✨
25,000+ UNIQUE VISITORS! 🤩 Thank you so much for all the support 🖤
Anyone else still obsessed with Wordle? 🤩
WE’RE BACK WITH A NEW PROMPT! ✨ it’s been busy over at FEHQ but we’re back and ready to get posting again! What writing will this prompt inspire?
*CLOSED* SHORT STORY COMPETITION CLOSES TODAY AT 11:59pm ✍️ LINK IN BIO FOR FINAL ENTRIES ✨ GOOD LUCK!
What’s your favourite book adaptation? Comment below 👇
*CLOSED*
@rosalindhullarts ‘s fantastic spoken word poem is now live on the site - link in bio to read! ✨