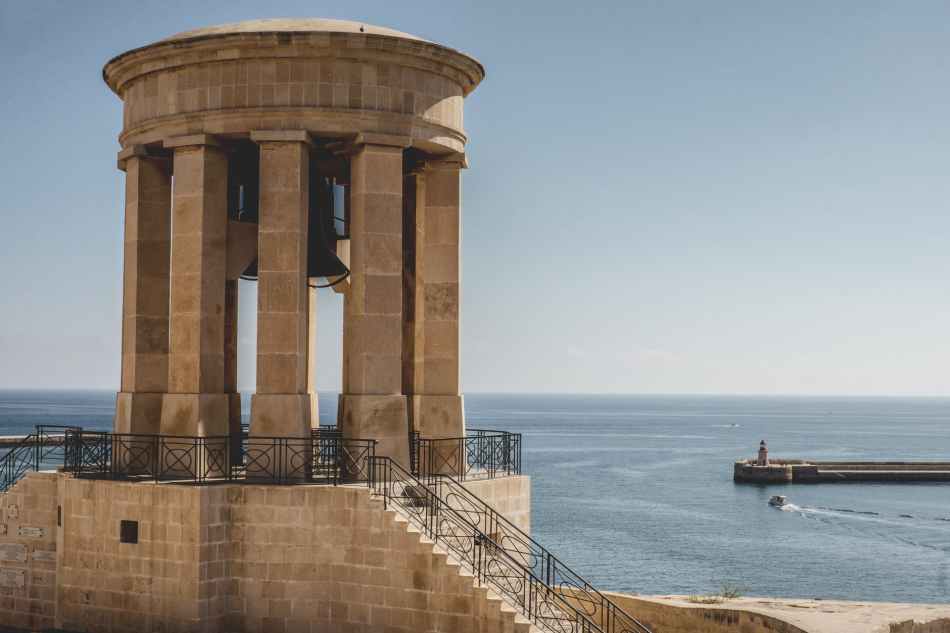 I watched the scattered crowds of tourists and locals as they cheered and clinked their wine glasses together. The men were dressed in linen shirts and the women in cocktail dresses. Some groups were loud and shrill, whilst others murmured amongst themselves quietly. I skimmed my hands across the ruffles of my dress, fiddling with the fabric and savouring the cool evening air which nipped at my skin. I couldn’t remember the last time I was granted an opportunity to be alone, where I could observe the clear, night sky blanketed with thousands of minuscule, twinkling stars.

I was seated at a table along the promenade of Marsamxett Harbour, sipping on my own glass of red wine and enjoying the soft remnants of the day’s heat, as it slowly dwindled. Waiters flurried between the tables offering jugs of water while they balanced empty dishes on their arms.

Marsamxett Harbour was just a short walk away from Sliema’s primary seafront, of which the latter led towards the vibrant St. Julian’s Bay. Sliema was once known as a small, quiet fishing village which then became occupied by the British Empire to build forts and barracks. This was until Malta reclaimed its country. Then, Sliema became a coastal resort and one of the country’s busiest commercial hubs for tourists and the affluent.

As you venture away from the hotels and meander through the streets filled with townhouses and villas, you’ll find yourself surrounded by plenty of retailers and bars. If you visit The Point shopping centre just behind the harbour, you’ll discover a great selection of outlets, a large supermarket and some small eateries. There may be a few familiar high-street brands that you’ll recognise, yet rest assured, there are lots of Maltese or central European ones too. But be aware, this place is a little hard to find. Though there is signage posted all along Sliema’s seafront, The Point is secretly hidden behind a construction site and a concrete alleyway is the only way through to the centre from Tigne Point – the edge of the Sliema coastline.

If you are not in the mood for shopping, then do visit Marsamxett Harbour. At night, stone walls and iron railings trickle along the promenade with brightly-lit lampposts dotted along the way. The shapes of buildings are blurred into the darkness, detectable only by the specks of lights winking across the bay. Along the harbour front, countless tour boats and luxury yachts rocked in their slumber, sedated by the wave’s soft caresses. They seemed unperturbed by the flow of conversations drifting in and out of the bars.

In the day, Marsamxett’s harbour is transformed. Instead of the gentle laughter drifting into the night sky, sunlight fills the port and lights up any darkening shadows. From the crack of dawn, loud, bustling chatter bubbles up until it peaks at midday, where burly middle-aged men wave their pamphlets encouraging you to book a boat tour with them. This historic boating port became the key destination point for tourists and locals to hop onto a vessel and head over to the capital city – Valetta. The choice of taking a boat or bus is entirely up to you and each offers a completely different experience.

While the former offers a scenic viewpoint of the azure waters and the tall, distant buildings of Valetta, the vehicular route parades you through the terraced streets giving you a glimpse of the local landscape and other spectacular bays. Along the route, you will be driven past markets adorned with juicy produce and meaty provisions. You will most likely find yourself glancing at the display of swordfish, octopus and even rabbits – the Maltese national dish of stew ‘Stuffat tal-fenek’, or what is simply known as ‘fenek’.

As you stroll through the lanes of Valletta, you’ll find the fragrance of this place is lingering. It’s a mix of all things Mediterranean; buoyant salted air combined with sultry herbs and spices from the restaurants and bars situated alongside us. The restaurants serve all sorts of delights, from traditional dishes to handmade pizzas to seafood. This place was vastly different from the fishing harbour back home in Poole which tainted the air with a firm smell of fish. It’s typically the first thing you notice.

In Valetta, the buildings are far grander than what you’ve previously seen in Sliema and Marsamxett Harbour. Though they are of the same sandy-stone colour, these buildings in the capital stand taller and their distinctive Victorian and Gothic features, carved from the British invasion, are painted in punchy reds, blues and purples. Like most of Malta’s landscape, the roads in central Valetta are narrow, often one-way streets that are easy to aimlessly wander through.

The entrance to this city is noble. Before you step foot into the capital, you are greeted by the City Gate – a large, spectacular walkway sat on three archways, high above the ground. It features a short, polished road and two slabs of trapezoid stones facing each other. Over time, the gate has been through five phases of reconstruction and modernisation. The first pioneering structure was built in 1569, whilst the fifth and most recent development was constructed between 2011 and 2014 by the Italian architect, Renzo Piano. The fifth gate is considered to be the ‘most contemporary version’ of them all, and so it has been criticised for not fitting in with Valletta’s overall ambience.

I remember my visit to the city very well. I had become lost in the capital, leading me somewhere I didn’t anticipate. My original destination was to have been the Barrakka Gardens.

The Barrakka Gardens are two public spaces offering a quiet breathing space away from the streets filled with travellers. The Lower Barrakka is spectacular in its own right, displaying views of the Grand Harbour in an open, shaded space. It sits at ground level along the Quarry Wharf, further away from the Upper Gardens and the main city streets.

The Upper Gardens, however, is more frequently visited and popular amongst the public. Alike the Lower Gardens, the Upper has lush greenery, refreshing fountains and plenty of benches for you to sink onto. If you visit the Upper Barrakka, you’ll be able to pleasantly enjoy the afternoon sun and admire the monuments of important people, like Winston Churchill and Sir Thomas Maitland. At the edge of the park, there is a terraced area facing outwards to the sea, separated by numerous archways. Through this looking point, you can see the astonishing panoramic view of the Grand Harbour and the Three Cities. Since this park is on higher ground, the cloudless, ultramarine waters flicker in the sunlight and tempt you into joining them for a swim.

2 comments on “Travelling the Streets of Malta, pt. 1 by Sophie Terry”

NEW FICTION - Angie by Danielle Dixon is live now ✨
Which one are you? 📖 #trueneutral #chaoticevil
Andddd we’re back! After a short break to move into our new home, we’re finally back posting, first with our weekly writing prompt! Send in your creative writing now to be featured on the site!! Link in bio for how to write for us 🖤
Exciting things happening at FE HQ - We’ve moved house! We’re taking a short break from uploading to the site and reading submissions as we get settled in. Please continue to send in your submissions, just be aware that it will take us slightly longer to reply, and therefore a bit longer to get your writing on the magazine ✍️ Watch this space - exciting things coming soon!! 🖤
Any other writers guilty of this? 😂
What’s your favourite character name you’ve found? 🤔✍️
NEW POST - Part 1 of Kevin’s story Intrusions is live on the site! Link in bio ✍️
Our ‘Forever Grammar’ series’ newest article on the difference between ‘your’ and ‘you’re’ is now live! What other grammar worries can we help you with? Leave a comment! ✍️
NEW POEM ✨ ‘Passion’ by Lana is live on the site now - link in bio ✍️
Tag someone who needs to hear this! ✍️
Have you ever been to a bookstore to see where you would be on the shelf? This is a fun and interesting thing to do as an aspiring author! Why other authors and genres are you near? 📚
We’re looking for GUEST ADVICE ARTICLES from passionate writers who specialise in these areas. If you are knowledgable about any of these genres and want to help aspiring writers better understand them, send us an email to hello@foreverendeavour.uk with the subject ‘Guest Article’. We’re looking forward to hearing from you! 🖤
NEW POST by @monhattanmaid - link in bio 🖤
Comment below! ✍️
👏🖤